Vitellone Bianco dell’Appennino Centrale PGI is the fresh meat obtained from cows and bullocks of the Chianina, Marchigiana and Romagnola pure breeds defined also “white breeds from Central Italy” of between 12 and 24 months old.

The production area of Vitellone Bianco dell’Appennino Centrale PGI is within the Umbria, The Marches, Abruzzo and Molise regions and the entire territory of the provinces of Bologna, Ravenna, Forlì- Cesena and Rimini in the Emilia Romagna region; Benevento and Avellino, limitedly in some areas of Caserta in the Campania region; Frosinone, Rieti, Viterbo, parts of the provinces of Rome and Latina, in the Lazio region; Grosseto, Siena, Arezzo, Florence, Pistoia, Prato, Livorno and Pisa, in the Tuscany region.

The calves must be fed exclusively with the mother’s milk until they are ready to be weaned. The calves can be raised in pastures, free-range stables or semi-wild. After weaning, they are fed fresh and/or conserved fodder originating from natural fields, artificial and herbaceous cultivations typical of the indicated geographical area. In addition, the use of simple or composed concentrated animal feed and the addition of mineral supplements is permitted. The nutritive standards must be high, with a protein quota of 13-18%, depending on the stage of development of the animal. At this stage, the animals can be kept in free-range stables, a closed space, or left semi-wild. Slaughtering must take place within the production area.

The meat of Vitellone Bianco dell’Appennino Centrale PGI is succulent and nourishing; it is fine-grained and has a vivid red colour. It is firm and elastic at the same time, with small flecks of white fat.

The origins of Vitellone Bianco dell’Appennino Centrale PGI date back to the pre-Roman period. In fact, the Etruscans reared cows with the same common characteristics of those reared in the Apennines today. Today’s breeds are the result of crossbreeding and selection of the Bos Taurus Primigenius. In particular, the Romagnola breed was selected from ancient breeds reared by the barbarian populations in the VI and VII centuries A.D. The Marchigiana, on the other hand, is the result of crossbreeding between the Romagnola and Chianina breeds, carried out in the XIX century by local farmers.

Vitellone Bianco dell’Appennino Centrale PGI can be kept in the fridge for up to two days wrapped in cling film. It is best grilled or fried, spit-roasted or oven cooked, although it is also ideal for using in stews. To maintain and enhance the tenderness, taste and flavour of the meat, it is important to preserve the liquids while handling the meat: dry meat will be harder, leathery and have little taste or flavour. Vitellone Bianco dell’Appennino Centrale PGI is mainly known n for being the meat used for the “Fiorentina T-Bone Steak”.

Vitellone Bianco dell'Appennino Centrale PGI has the same flavour and aroma as the those of the plants found in the meadows and pastures in the central Apennines where these breeds of cattle graze. This characteristic makes it one of the highest quality animal products, also thanks to a fortunate combination that associates this genetic predisposition with natural systems of breeding and feeding. 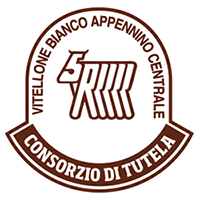