Veneto PDO extra virgin olive oil is obtained from the Grignano, Favarol, Leccino, Casaliva, Frantoio, Maurino, Pendolino, Leccio del Corno, Trep, Drop, Marzemino, Riondella and Matosso olive varieties. The designation must be accompanied by one of the following place names: Veneto Valpolicella, Veneto Euganei e Berici or Veneto del Grappa. These references refer to the different production areas and the percentages of olive varieties present in the groves, as listed below.

The production and processing area of Veneto PDO extra virgin olive oil is within the territory of several municipal areas in the provinces of Verona, Vicenza, Treviso and Padua, in the Veneto region.

The olives must be harvested by January 15th of each year. The maximum permitted production is 7 tonnes per hectare of olive groves and the oil yield cannot exceed 18%.

Extra virgin olive oil is highly perishable and must be stored correctly in order to maintain its organoleptic characteristics. It should therefore be kept in a cool, dark place at a temperature between 14 and 18°C, away from heat sources and other foods that release odours. It should be consumed within four to six months of pressing to fully appreciate its qualities. Veneto PDO is characterised by a wide range of organoleptic characteristics which make it a perfect condiment for boiled vegetables and grilled fish.

Veneto PDO extra virgin olive oil is characterised by a maximum acidity of between 0,5 and 0,6 g per 100 g of oil, depending on the geographical reference. The panel test result is at least 7,5. 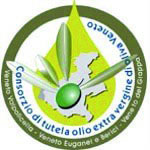 I DUE FRATELLI BOTTER