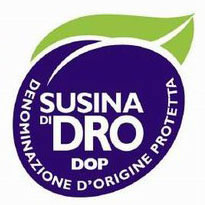 The production area of Susina di Dro PDO is within numerous municipalities in the Autonomous Province of Trento, situated in the Sarca Valley.

Two different growing methods are used: pieno vento and fusetto. The density of the plantation must not exceed 2.500 plants per hectare and the maximum production of the production area may not exceed 78 tons per hectare. Productivity is controlled through pruning, which is carried out by hand between October 1st and March 31st. Mineral fertilising, pest control and irrigation are managed in accordance with the techniques that are traditionally used in the production area. Harvesting is carried out by hand in August and September, respecting the typical staggered ripening that occurs due to the different microclimates in the hills and valleys. The fresh, healthy and clean fruit, free from foreign substances or odours, are packaged within the production area in order to avoid further damage and rotting.

Susina di Dro PDO has an oval, slightly elongated shape, with a skin colour that varies from purplish-red to blue-purple; the skin has a waxy outer film. The flesh is compact and yellow or yellow-green in colour. It is distinguished by its delicate sweet-acidulous-aromatic flavour and for its pleasant pasty texture.

The origins of Susina di Dro PDO date back to 1284, as demonstrated in the 42 specifications written in the Carte di Regola del Piano del Sarca. Industrial plum cultivation took off in 1911, with the establishment of the Cooperative Consortium Lega dei Contadini del Bacino Arcense, which on its foundation already boasted 650 partners. At the beginning of the 1960s, thanks to the expansion of storage space and the earlier realisation of a modern fruit-drying plant, the Consortium produced 150 tons of dry plums. The entire community of the Sarca valley, which has always been sensitive towards the valorisation of the qualitative specificity of the plums grown in Dro, has an active synergetic attitude towards tourism, the territory and agri-food. “Dro: the time of plums” is an annual event which takes place in the area every August and is the modern day version of an initiative which began in the 1970s; The Week of Dro Plum Trees in Bloom.

Susina di Dro PDO can be kept for several days in a cool, dry place; it will keep longer if it is conserved at a low constant temperature (1-2°C), maybe even up to 3-4 weeks. As well as being traditionally eaten in its natural form, it can be dried or used in the preparation of juices, jams, ice-cream, syrups, fermented drinks and distillates. Already well-established as an ingredient in desserts, the Susina di Dro PDO is now becoming popular in pasta dishes, for example as the filling for plum gnocchi.

Susina di Dro PDO is distinguished by its high content of polyphenols and low sugar content: these two characteristics are closely tied to the distinctiveness of the production area, especially the regular winds - the most important is the so-called “Ora del Garda” - which guarantees clear skies and therefore continuous sunshine, as well as high temperatures.