Speck Alto Adige PGI is a charcuterie product obtained from pig thighs that are deboned, trimmed with or without the topside and therefore salted, lightly smoked and cured.

The production area of Speck Alto Adige PGI is within the entire territory of the autonomous Province of Bolzano (Südtirol), in the Trentino Alto Adige region.

The selected hind legs are delivered fresh and must not weigh less than 10,5 kg; deboned and trimmed they must weigh at least 5,2 kg and the surface must be homogenous without fissures or irregularities. From this point on in the processing, the legs are referred to as baffe. The rind of each leg is marked with the processing starting date. Within four days of this date, the baffe are lightly salted and seasoned with natural aromatic herbs. Cold smoking is carried out with non-resinous wood and the smoke must have a maximum temperature of 20°C. The baffe are then cured in special rooms with a temperature ranging from 10 to 16°C and a humidity level of 55-90%, following local traditions. The length of the curing process depends on the final weight of the product, ranging from 20 to 30 weeks for heavier products.

Speck Alto Adige PGI is characterised by its “heart” or “shield” shape. The exterior is brown in colour and the slice is red with pinkish-white areas. It has an elastic consistency; the lean parts are not sticky and the fat parts aren’t greasy. The flavour is typical, intense and savoury, not salty, with smoky, grassy and spicy notes, as well as hints of aromatic herbs.

Tradition and historians date preserved meat production back to the period of the Longobard invasions. However, the first historical mentions of Speck date back to the beginning of the III century: there was reference to a particular meat preservation method, which was carried out through the combination of smoking and air drying. Over the centuries, dry salting and smoking practices were perfected by means of “secret” recipes used by local producers. As a speciality of the Alto Adige area, today also appreciated at international level, Speck alto Adige PGI is honoured with an ad hoc festival in Val di Funes; the Speckfest Alto Adige.

Whole Speck Alto Adige PGI should be kept in a cool environment with a temperature between 10- 15°C and a humidity level of 70%; a cellar is ideal. The packaged product can be kept on the least cold shelf of the fridge, wrapped in a damp cloth after having been opened. Before serving, it is best to leave it at room temperature for a few hours, in this way it regains its fragrance. In order to savour it completely, it is important to cut perpendicularly to the fibres and to slice it as thinly as possible. Speck Alto Adige PGI is widely used in starters, first courses and main dishes: from traditional recipes such as the typical canederli (bread dumplings) to more innovative combinations, such as melon and fig. The particular aromatic flavour of the product makes it a perfect accompaniment to regional red wines such as Schiava dell’Alto Adige and Lagrein.

The mixing of the aromas is the only stage in which the producer is free to “personalise” Speck Alto Adige PGI with “secret” recipes handed down the generations. The only restriction is that the percentage of salt in the final product cannot exceed 5 %. 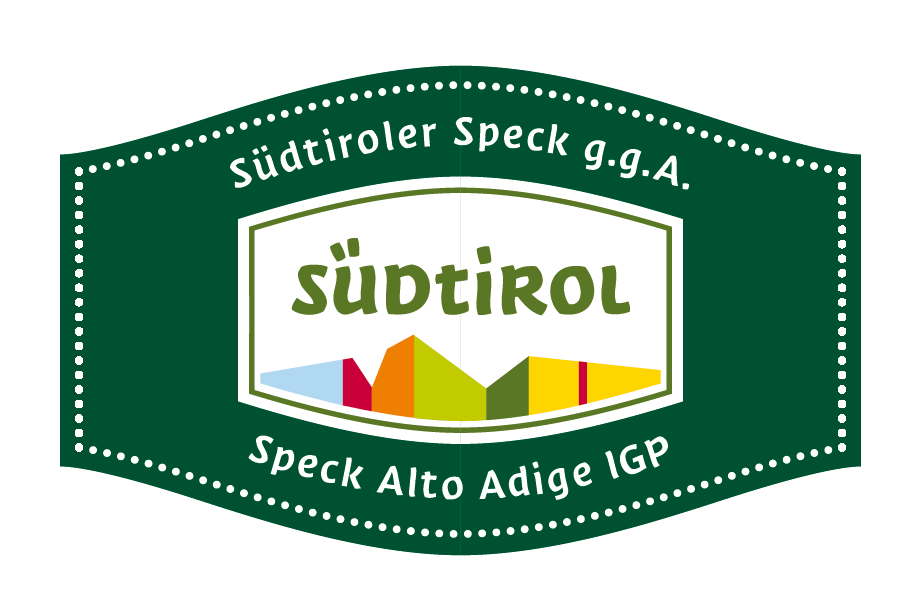