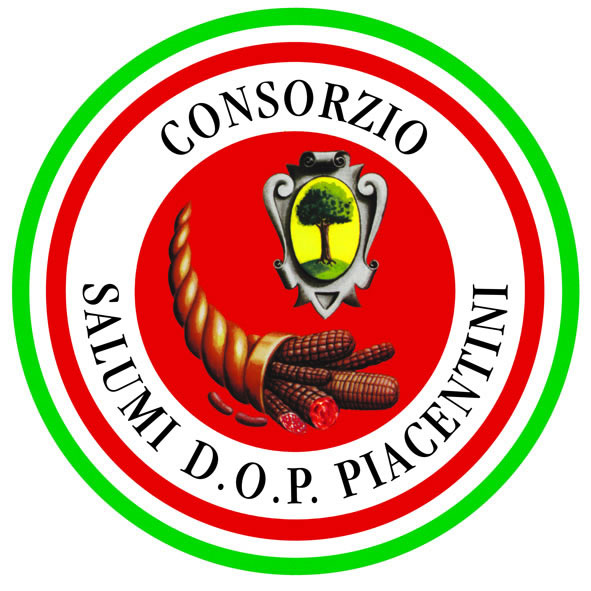 Salame Piacentino PDO is a large-grained stuffed charcuterie product, obtained from the lean and fatty parts of pigs belonging to the Large White, Italian Landrace and Duroc breeds or other breeds compatible with the Italian heavy pig.

The production area of Salame Piacentino PDO is within territory in the Province of Piacenza, in the Emilia-Romagna region, situated up to 900 metres above sea level. The pigs used for production should be born, raised and slaughtered in the regions of Lombardy and Emilia-Romagna.

The lean part is selected, excluding the cuts which come from the cleaning of the head; lard, throat and parts of the underbelly free from soft fat are used for the fat part (10% to 30 %). The meat is minced with the aid of a mold with large holes (diameter of 10-14 mm) and is seasoned with salt, pepper, nutmeg, garlic, wine and sugar. The meat paste is inserted into a pork casing, bound with string, pierced and dried in a suitable environment. The curing process, which takes place under controlled temperature and humidity conditions, lasts for at least 45 days, starting from the date of salting. Ventilation and exposure to light and natural humidity are permitted during the curing stage.

Salame Piacentino PDO has a cylindrical shape with a weight ranging from 400 g to 1 kg. When cut, the colour of the slice is vivid red and interlaced with pinkish-white lard fat. The taste is sweet and mellow and it has a characteristic and fragrant aroma that is influenced by the period of curing.

The first traces of pig farming in the production area of the Salame Piacentino PDO date back to one millennium B.C. Evidence was subsequently found in Roman civilization, with archaeological finds such as a bronze talisman-pendant showing a small pig. Depictions of this animal can be found in the Abbey of San Colombano a Bobbio, in Val Trebbia, where it is possible to admire a mosaic from the XII century portraying the “sacred” rite of pig slaughtering. At the beginning of the XV century, Milan and Lombardy tradesmen were already able to distinguish Piacenza charcuterie from those coming from other places within the Po valley, qualifying them as “roba de Piaseinsa” (stuff from Piacenza). Subsequently, in the first decades of the XVIII century, Piacenza charcuterie were also appreciated in elite French and Spanish environments, thanks to a skilful diplomat from Piacenza, Cardinal Giulio Alberoni.

The best way to conserve Salame Piacentino PDO is to completely remove the external casing and wrap it in a slightly damp cloth. In this way, it can be kept in the fridge for up to 15 days. In order to obtain a compact slice, it is best to cut the salami obliquely while still cold, and to eat it when it reaches a temperature of 10°C. It is excellent as a starter, served with traditional fried gnocchi or fresh figs and accompanied by a glass of one of the Colli Piacentini PDO wines.

The distinctive quality of Salame Piacentino PDO is the result of the charcuterie masters’ ability to artfully amalgamate the meats and seasoning.