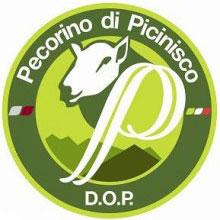 Pecorino di Picinisco PDO is an uncooked cheese with a cylindrical form and flat surfaces, made with raw milk. There are two types: Scamosciato and Stagionato (Semi-mature and Mature).

The production area of Pecorino di Picinisco PDO is within the entire Comino Valley in the Province of Frosinone, in the Lazio region.

The milk used for the production of Pecorino di Picinisco PDO must be obtained from the Sopravissana, Comisana or Massese sheep breeds. 25% of goat’s milk is permitted and must be obtained from local populations of Grigia Ciociara and Bianca Monticellana goat breeds and their cross-breeds. The animals must be fed with at least 70% fodder and on natural pastures in the production area. Only raw whole milk can be used, obtained from one or more milkings, while lamb or kid rennet paste is used to curdle the milk, taken from animals reared in the production area. After the curd breaks, the product is left to rest before being placed in the molds, after which they are blanched in boiling hot water for 2-5 minutes. After being drained briefly, the product is dry salted for 12-24 hours, depending on the size, with no less than 20 g of salt per 1 kg of cheese. Ripening is preferably carried out by placing the product on wooden planks made of fir or beech, in air conditioned or naturally aerated rooms. The ripening period varies depending on the type of cheese: 30 to 60 days for Scamosciato, extending to more than 90 days for Stagionato. During the ripening process the forms can be treated with olive oil and wine vinegar.

Pecorino di Picinisco PDO has a diameter of 12-25 cm and an edge of 7-12 cm. The appearance and flavour of the two types, Scamosciato and Stagionato, are very different. The Scamosciato type can be found in wheels ranging from 0,7 to 2,5 kg, with a thin wrinkled rind, off-white to pale yellow cheese that has a compact structure, and a scattering of eye formations. It has a sweet flavour with strong aromas of mountain pastures. It doesn’t have a “farm-yard” smell. The Stagionato type is produced in wheels of between 0,5 and 2 kg. It has a thin wrinkled rind and the cheese is compact with a few eye formations, but the flavour is more intense and full bodied, acquiring sharp notes as ripening progresses.

Pecorino di Picinisco PDO represents a major dairy product for the region of Lazio and is an important part of its tradition, as demonstrated in many historical texts. The sheep and goat censuses that were carried out between 1875 and 2000 show that the vocation of the local population and land was sheep and dairy farming.

Pecorino di Picinisco PDO is best kept in a cool dry place, preferably wrapped in a slightly damp cotton cloth. It’s had a considerable influence on the local cuisine, and is used as a basic ingredient in many traditional recipes. It is excellent on its own, with a slice of Pane Casareccio di Genzano PGI and fresh broad beans, or with acacia honey, green tomato jam or Cipolla Rossa di Tropea Calabria PGI onion jam, and jelly flavoured with Eucalyptus Trappist beer.

The lamb or kid rennet paste used to curdle the milk differs from liquid or powder calf rennet, thanks to the presence of lipolytic enzymes, which are virtually absent in the last two. This characteristic, together with the fact that the milk is not inoculated with lactic acid bacteria, thereby preserving and maintaining the specific flora, is a key element in the traditional processing of Pecorino Picinisco PDO and contributes to its characteristic organoleptic properties.