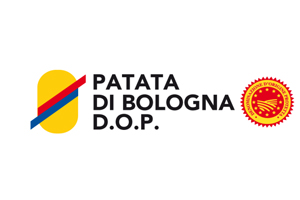 Patata di Bologna PDO is a fresh tuber with yellow flesh belonging to the Primura variety of seed potato.

The production area of Patata di Bologna PDO is within the territory of the Province of Bologna, in the Emilia Romagna region.

The ground is prepared by creating furrows sowing occurs in March. Only certified tubers are allowed for seeding, both whole and cut. The preparation of the seed potato includes pre-budding, which allows them to develop earlier and to be more resistant once planted in the field. During this stage, the tubers must be left in an environment free from frost, with soft light, in order to develop a shoot of the size of a few millimetres, with a stubby and robust shape. Fertilising is done in such a way to ensure that the soil receives the most suitable nutritional elements, such as nitrogen, phosphorus and potassium, in this way obtaining excellent produce from both a quality and quantity viewpoint. The maximum production is 60 tons per hectare. Harvesting takes place in July, when the product reaches its full physiologic maturation: the skin must not tear if rubbed with the fingers, therefore allowing specific machinery to place the product in containers for transportation, without risking damage to the potato. The potatoes are stored in wooden or rigid plastic crates, in refrigerated cells, at a controlled temperature of between 4 and 7°C and away from the light. This is to limit moisture loss while it is waiting to be packaged.

Patata di Bologna PDO is characterised by its regular, long and oval shape, with slightly prominent superficial buds (eyes). The peel is smooth, intact and free from external defects that could modify its characteristics; the size of the tubers is uniform (between 40 and 75 mm) and the consistent flesh has a variable colour ranging from white to straw yellow. The product can be kept for a long time and has a typical flavour.

Historical sources demonstrate that the diffusion of the potato in the Bologna area took place at the beginning of the XIX century, thanks to agronomist Pietro Maria Bignami, who supported the cultivation of this vegetable and encouraged the knowledge of local farmers. This cultivation reached its maximum potential during the XX century, becoming an important resource for the local rural economy of the entire Province, right across the valleys, hills and mountains.

Patata di Bologna PDO should be kept in a cool, dry place. It can be consumed after cooking and is excellent both on its own and with other dishes, as it can soften their flavour. In fact, the product is often served with fish such as dried salted cod or cuttlefish. It can also be used to prepare more particular dishes, like “stubanki roulade with pear carpaccio”, or traditional dishes like “cream of cannellini and balanzoni filled with Mortadella Bologna PGI and Patate di Bologna PDO”.

Many of the specific organoleptic qualities of Patata di Bologna PDO are given to the composition of the cultivation soil, which is very rich in potassium, phosphorus and nitrogen, and to the rainy climate of the area which facilitates the first growing stages of the vegetable and the beginning of suberisation.