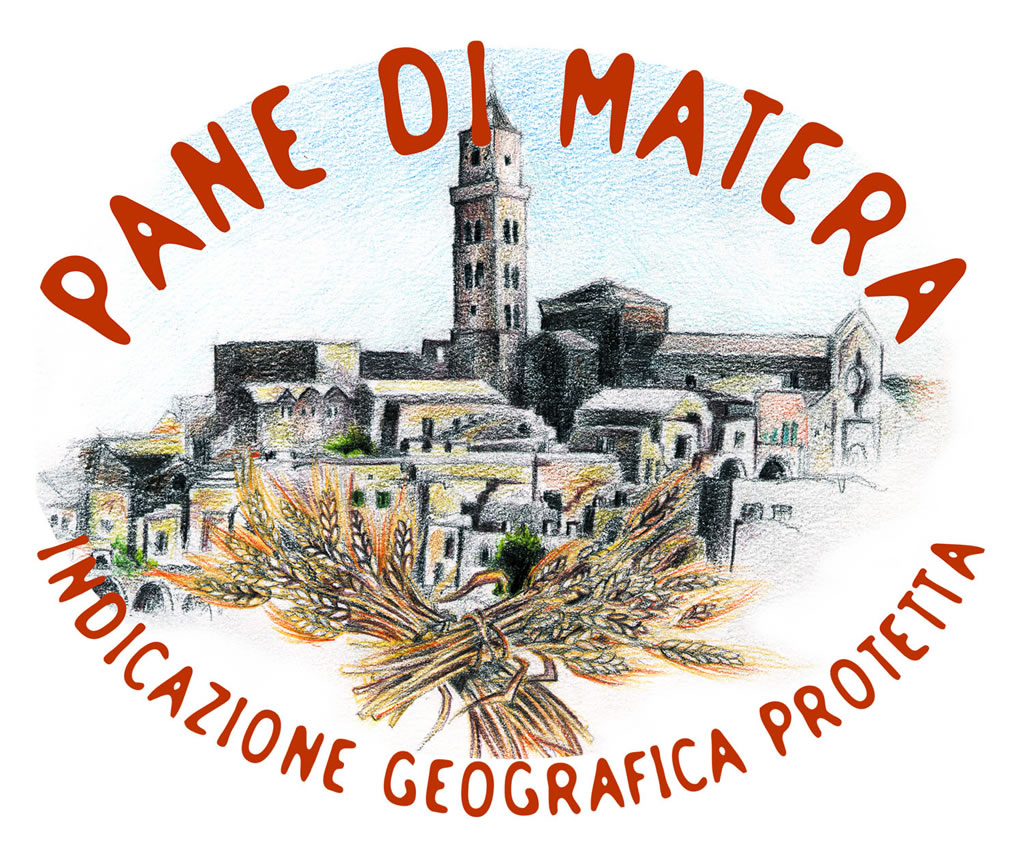 Pane di Matera PGI is bread obtained from remilled semolina and/or durum wheat, of which at least 20% comes from local ecotypes and ancient varieties, to which natural yeast (Mother yeast), salt and water are added.

The production area of Pane di Matera PGI is within the entire territory of the Province of Matera, in the Basilicata region.

The product is made using mother yeast, which in the case of Pane di Matera PGI is obtained from the flesh of fresh ripe fruit that has been macerated in water for 48 hours. The compote is added to semolina and water, after which the mixture is sealed in a graduated food container for 10-12 hours, at 26-30°C, until it doubles its volume. Flour is then added in an equal quantity to the weight of the obtained mixture. The ingredients are then kneaded in a mixer and the dough is left to leaven in a vat for 25-35 minutes. Once the leavening stage is finished, preforms weighing between 0.6 kg and 12 kg are prepared and weighed to obtain a final product weighing between 500 gr and 10 kg, with values that can vary by intervals of 10% . The preforms are then shaped by hand and left to rest for 25-30 minutes in suitable wood or stainless steel containers, covered with cloths. The preforms are then manually given the characteristic shape of Pane di Matera and marked on top with a pressure stamp bearing the uppercase letters "MT", and then put in wood or indirectly heated ovens. The cooking time varies according to the size of the bread and the type of oven used, ranging from a minimum of 1 hour for the 500 gr loaves to a maximum of 4 hours and 30 minutes for the 10 kg loaves.

Pane di Matera PGI has a Horn shape – long and slightly convex - or Forma Alta (high shape) – high and compact, with “crosses” on the sides. The crust is golden brown and 2-3 mm thick, with a typically burnt smell. The interior is yellow with a typically irregular porosity and a variable diameter of 2-3 mm up to 60 mm. The taste and flavour are very characteristic.

The art of bread making has been part of local tradition since ancient times. There is evidence demonstrating particular techniques of local bread making dating back to the times of the Reign of Naples. There are numerous artistic and literary testimonies in the production area of Pane di Matera PGI, as well as legends and local tales, which attest to the importance of bread in the life and economy of the territory.

Pane di Matera PGI must be kept in a dry place. To better preserve its qualities and fragrance, it should be kept in a linen cloth until it is eaten. It is excellent when eaten fresh out of the oven. The 1 kg loaf can be kept for approximately 7 days, while the 10 kg loaf will keep for up to 14 days. It is especially good as the base for the traditional feddarauss (bruschetta) with tomatoes, oil and oregano. It is also widely used in hot or cold vegetable soups, such as the typical cialledda coll, made with bread, water, onions or tomatoes, and a variety of local vegetables.

The choice of old wheat varieties such as Senatore Cappelli, which give Pane di Matera PGI its unmistakable taste and flavour, can be traced back to the particular pedologic and climatic characteristics of the Matera hills.