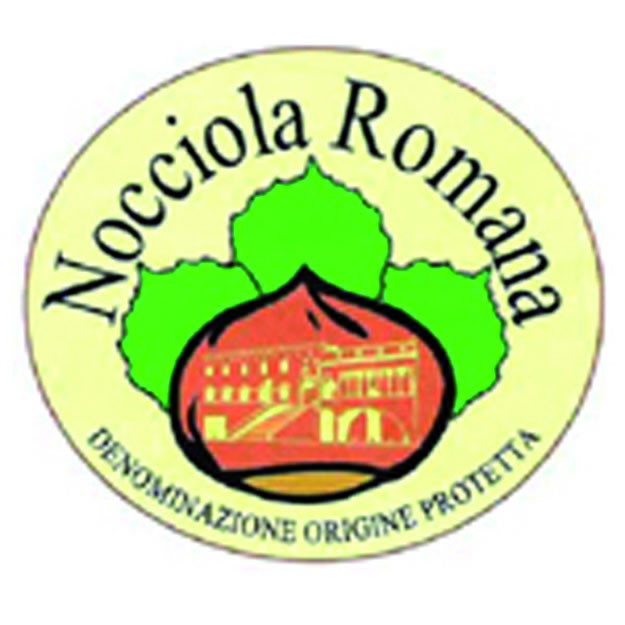 Nocciola Romana PDO is a dried hazelnut, in its shell or shelled, belonging to the Corylus avellana species, deriving from the Tonda Gentile Romana and Nocchione varieties.

The trees are cultivated with the “shrub”, “vase shrub” and “single stem” plantation systems. The number of plants permitted per hectare varies substantially according to whether the plantations are new or old: old plantations cannot contain more than 150 per hectare, whereas new ones can have up to 650 per hectare. The shrubs are pruned annually and fertilising must not force production. Harvesting must take place between August 15th and November 15th, although generally most of the hazelnuts are harvested by mid-September, when they are fully ripe. The fruit are gathered exclusively from the ground. However, if the hazelnuts are left for too long on the ground their quality could be jeopardised, therefore the use of driven or “self-propelled machines is permitted. The hazelnuts are then dried until October in specific drying rooms, until they reach a maximum moisture content of 6%. Finally, the hazelnuts are shelled, selected, weighed and conditioned. These operations must be completed by August 31st of the following year.

Nocciola Romana PDO has a sub-spherical, spherical or sub-ellipsoidal shape, with a slightly sharp end. The shell size spans from 14 to 25 mm. The flavour is very fine and persistent with a compact and extremely crunchy texture.

The cultivation of hazelnuts in the Lazio region boasts ancient origins. The presence of the Tonda Gentile variety in the area goes back to pre-Roman times, whilst there is evidence of its cultivation since the fifteenth century. The consumption of this exquisite dried fruit became popular during the following century and was also known to enrich Papal banquets. In the Storia del Carnevale Romano (History of the Roman Carnival) nocchie (hazelnuts) were mentioned as a food that was much appreciated by Pope Leone X. The reputation of Nocciola Romana grew over time, until reaching its peak in the XX century, when it succeeded in finding its own niche on the agri-food market, above all as a basic ingredient in confectionery products.

Nocciola Romana PDO must be kept in a cool place away from heat sources, light and humidity. The hazelnuts can be eaten raw, dried or roasted. The culinary tradition of Viterbo combines them with many meat-based dishes. They are also used as an ingredient in the preparation of many desserts, including typical cakes and biscuits such as tozzetti, ossetti da morto, brutti buoni and mostaccioli.

The distinctive climatic and territorial characteristics of the production area contribute to making Nocciola Romana PDO a unique product of its kind, in particular due to its crunchiness and compact, uniform texture. The volcanic soils, rich in micronutrients and potassium, are complimented perfectly by the mild climate of Mounts Cimini and Sabatini, where temperatures are in complete harmony with the evolutionary stages of the plant.