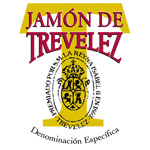 The Jamón de Trevélez PGI comes from castrated male pigs or females of the Landrace, Large White and Duroc Jersey races or crosses.

Jamón de Trevélez PGI is produced in the community of Trevélez, which is in the east of the province of Granada in the Autonomous Community of Andalusia.

The thighs of the pig are salted to allow dehydration, necessary for long-term conservation. The length of this phase depends on the weight of the thighs. They are then washed to remove the salt remaining on the surface and left to dry in a natural environment. The following phase is the dehydration in a natural environment and finally the drying. Seasoning varies according to weight from 14, 17 to 20 months. The weight of the fresh ham must not be less than 11.3 kg and during the process described above it must lose 35% of its initial weight.

Jamón de Trevélez PGI has a rounded shape, still on the bone with the rind and it has a brilliant red colour. The taste is delicate and slightly salted; there is also a little white-yellow intramuscular fat. The consistency is buttery.

The story of Jamón de Trevélez PGI has an ancient origin. The first traces of this ham date back to about 200 years ago. In 1862, there was a producers' competition, and Queen Isabel II permitted the region of Trevélez to use the royal stamp to mark hams produced in this area.

Jamón de Trevélez PGI should be kept in a dry, well-ventilated place, covered with large-weave cloth which prevents excessive drying-out. The boneless meat is already sliced and it can be kept in the fridge, wrapped in paper. Jamón de Trevélez PGI should only be eaten at room temperature (14-22°C), sliced or in mall pieces. It can be used in the preparation of a variety of dishes and appetisers. Jamón de Trevélez PGI is very often matched with full-bodied red wines. It is a fundamental ingredient in the preparation of many dishes, used as a filling for meat and vegetable and for vegetable rolls. It goes very well with meat and in particular with poultry.

The product is sold as Jamón de Trevélez PGI. Prior to production, the meat is weighed and labelled; it can therefore be divided into three categories: weighing between 11.3 and 12.3 kg; weighing between 12.3 and 13.5 kg and weighing over 13.5 kg. Jamón de Trevélez PGI is sold whole, with the trotter, boneless and vacuum-sealed, sliced, finely sliced and in appropriate containers.

The rigid climate of the high altitude and the natural environment, rich in oak trees means that Jamón de Trevélez PGI is a unique and inimitable product.