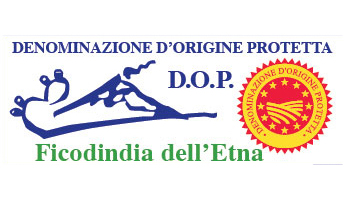 The production area of Ficodindia dell’Etna PDO is within the territory of the municipalities of Bronte, Adrano Biancavilla, Santa Maria di Licodia, Ragalna, Camporotondo, Belpasso and Paternò, in the Province of Catania, in the Sicily region. Parts of the area are within the Etna Regional Park.

Highly resistant to hot and dry conditions, the prickly pear plant is reproduced using two-year old branches, two thirds of which are planted. The most suitable soil is medium or large grain. After blooming, between the end of May and the first fifteen days of June, a large part of the flowers and still-small fruits are eliminated through an operation known as scozzolature (breaking in process). Harvesting is carried out by hand in the second week of August for fruit obtained from the first blooming (called Agostani or Latini), and between September and December for fruits of the second blooming (called Scozzolati or Bastardoni). The fruits are stored in dry and ventilated rooms and are subjected to a spine-removal process, which is carried out in order to eliminate the many spines that are present on the external part of the fruit. Hot water cannot be used during this process and the fruit are passed through a chain of special “tipping” containers that deposit them onto a conveyer belt; this transports the fruit to a brushing machine with special pile rollers that completely eliminate the spines without damaging the fruit.

Ficodindia dell’Etna PDO has an ovoid shape and is covered with spines. It is characterised by its succulent flesh. It is subdivided into three types: Sanguigna, which has succulent red flesh with a full-bodied flavour; Surfarina (or Nostrale), which has homogenous and tasty yellow flesh; Muscaredda (or Sciannarina), which has white flesh and a delicate flavour. Fruits from the first blooming (Agostani) are smaller than those from the second blooming (Scozzolati or Bastardoni).

The historic origins of Ficodindia dell’Etna PDO arrival in Sicily are controversial. In Naturalis Historia, Pliny the Elder attributes the origin of the name to the Greek city Opunte. Many believe that Christopher Columbus imported it to the Mediterranean area when he came back from America, while for others it derives from the Arabian name for the island (IX century). Never the less, the prickly pear blended perfectly into the botanic landscape of Sicily, its qualitative characteristics of colour, long life and consistency being unique to the south-western side of Etna.

The product is marketed as Ficodindia dell’Etna PDO in the following varieties: Sanguigna, Surfarina and Muscaredda, and the label can indicate the Agostani or Scozzolati typology. It is sold without its spines, in suitable cardboard, wooden or plastic packaging.

Ficodindia dell’Etna PDO is produced with a special cultivation technique called scozzolatura, which consists in the elimination of the first flowers in order to stimulate a second blooming with larger and better quality fruits.