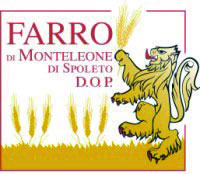 The Farro di Monteleone di Spoleto PDO refers to the grain obtained from the local emmer wheat ecotype belonging to the Triticum dicoccum species. It is produced in the following typologies: Whole, Semi-Pearled, Cracked and Emmer Wheat Meal.

Today’s cultivation technique is that which has been used for centuries. After harrowing, the emmer wheat is sowed mechanically, in rows or scattered, between February 1st and May 10th. Only organic fertiliser is used, with manure or manure by-products. Harvesting takes place in July, August and September by means of cutting-threshing. The processing stages vary according to the different product typologies: Cracked emmer wheat is obtained from Whole emmer wheat that has been stripped of the husk and broken into three or four parts; Emmer Wheat Meal is obtained from milling the Whole Emmer Wheat, producing whole-grain flour which is not powdery, although finer than the Cracked Emmer Wheat typology.

The origins of Farro di Monteleone di Spoleto PDO are ancient. This is demonstrated by several historic findings, such as the VI century B.C Etruscan grave in Monteleone, known as the “chariot tomb”, where they found emmer kernels amongst the various different cereals. Archive research brought to light documents which confirm that emmer wheat cultivation in Monteleone di Spoleto began to spread during the XVI century. Centuries later the importance of this cereal returned, when emmer wheat saved the population of Monteleone from starving during the Second World War. When the Germans arrived, they requisitioned all of the population’s foodstuffs, aside from the emmer wheat, as in Germany it was only used to feed animals. Inhabitants were therefore left with a food source that fundamentally saved their lives.

Farro di Monteleone di Spoleto PDO should be kept in a cool, dry place, vacuum- packed or in glass recipients. The Whole product must be soaked for two hours before cooking; Semi-pearled emmer wheat cooks in 30 minutes without soaking beforehand, as is the case for the Cracked product, which takes 25 minutes to cook. It can be eaten as a first or second course, as a side dish or cold dish. It is rich in vitamins and mineral salts, and is an essential ingredient for many typical dishes, such as imbrecciata, Saint Nicholas’s recipe for Valerian polenta.

The product is marketed as Farro di Monteleone di Spoleto PDO in the following typologies: Whole, Semi- Pearled, Cracked and Emmer Wheat Meal. It is sold vacuum-packed in plastic bags weighing 0.5 to 1 kg and in paper or nylon bags weighing 25 kg.

Farro di Monteleone di Spoleto PDO owes its specific characteristics to the pedoclimatic conditions of the production area, where the soils impede stagnation during the damp seasons: flat, short and tapering ear, with a vitreous and compact kernel, with floury residues when broken.