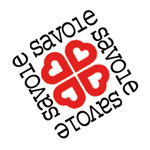 The milk used to make it must be coagulated with animal rennet. The cheese maker cuts accurately the curd in cubes to eliminate the whey and ensure a perfect dripping. This technique enables the cheese to concentrate the calcium contained in milk up to eight times more compared with the standard concentration. The curd grains are gathered and pressed to compact them into a mould. Ripening starts in the cold and humid cellar (10-15°C) and lasts about one week, then it continues in a mild cellar (14-18°C) and then in a warm cellar (max 25°C). This alternation favours the development of propionic ferments which release carbon gases and degenerate some bubbles inside the cheese, from which the famous holes, called eyes, originate. To test the right ripening level, a small cylinder of paste is removed from the mould. The presence of two or three holes in every cylinder allows selling the cheese.

Appearance and flavour: Emmental de Savoie PGI has a cylindrical and rounded shape and weighs up to 75 kg. The smooth rind features a colour which spans from yellow to nut-brown. The paste has a fawn yellow or light yellow colour and show welldistributed holes, smooth and brilliant.

Emmental de Savoie PGI is considered by French the king of cheese because its production goes back to a century-old tradition. Indeed, as documented from some manuscripts, this cheese is the most ancient of French Emmentals and its production goes back to the Middle Ages. At the beginning of the 19th century, this cheese was produced to conserve and use the surplus of spring milk until winter. The Savoy producers started to gather the milk coming from milking their herds to produce the Emmental de Savoie in suitable rooms which are called fruitières.

Emmental de Savoie PGI must be conserved in the refrigerator (8-10°C) wrapped into its original package or in a film. To taste it in the best way, it must be left at room temperature for about half an hour, so, it recovers its full softness and aromas. It can be eaten with a slice of bread, but it can also be used to prepare different dishes like the fondue or other recipes au gratin.

The product is sold as Emmental de Savoie PGI. It is marketed whole, in slices, in portions or grated.

The Emmental de Savoie PGI is the result of the skill of producers and of a production method which has been perfected and refined over many centuries of tradition. The special care dedicated to ripening, which requires three different levels of ripening in the rooms where cheeses ripens is an example. When the cheese is ready to be tasted, the refiner beats it and just the noise coming from the cheese permits to discover its level of ripening.