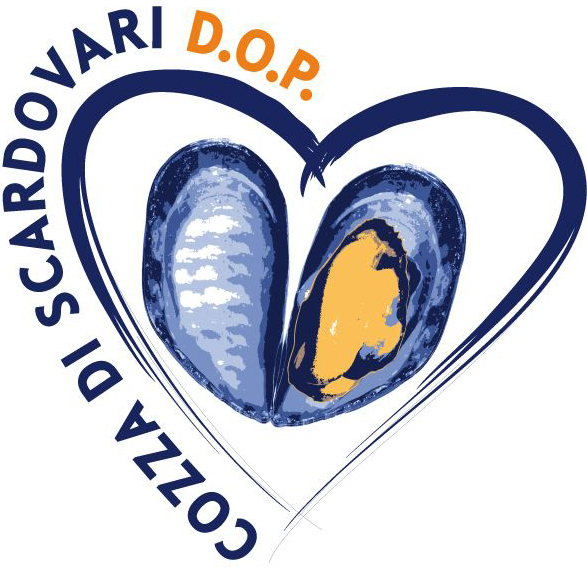 Cozza di Scardovari PDO is an elongated bivalve mollusc with a black-purple shell, belonging to the Mytilus galloprovincialis species.

The production area of the Cozza di Scardovari PDO is identified with Scardovari Bay and areas in the districts of Scardovari, Ca’ Mello and Santa Giulia in the municipality of Porto Tolle in the province of Rovigo, in the Veneto region. The term “bay” identifies an inlet with a surface area of 3,200 hectares and an average depth of 1.5 to 2 metres, communicating with the open sea by means of a “lagoon mouth”.

Water from the homonymous Bay is used for the purification, processing and packaging stages of the Cozza Scardovari PDO, which must be carried in the immediate surrounding area. The term “bay” identifies an inlet with a surface area of 3,200 acres and an average depth of 1.5 to 2 metres, communicating with the open sea by means of a “lagoon mouth”. The mussel seed can only be planted and grown in nurseries that are in Scardovari Bay and each fisherman prepares mussel socks in such a way that there is a density of 10-15 units per square metre. The seed is harvested by scraping the submerged surfaces, gathering from natural beds or by capturing the seed that has fixed itself to ropes or special collectors positioned on the sea farms that overlook the Po Delta. The harvest is carried out manually when the product reaches the minimum marketable size of 5 cm. The harvested product must be delivered to the landing point in such a way that it is possible to control the quality, and from here it is transported to the Scardovari purification plants in isothermal containers. At the end of the purification treatment, the product is packaged in a plastic mesh bag, placed in a cell with a temperature of 6 ° C and dispatched immediately on the same day or at the latest the next day, depending on the orders.

Cozza di Scardovari PDO has convex valves, about 6-8 cm long; it is triangular and has thin concentric striations. The lining of the shell is pearly-purple but may vary depending on the production cycle. The shell has strong tufts of hair-like filaments with which the mollusk attaches itself to nets or other supports. There is a high percentage of meat, more than 25% of the total weight; it has a pleasant and delicate taste due to the low sodium content.

The first local fishermen’s Cooperative in Scardovari Bay dates back to 1936, and over the last century the territory has undergone an extremely rapid transformation, which after the flood of 1966 led to the current configuration of the Bay. Since then, thanks to the skill of the workers, experimentations in mussel farming began in small nurseries in the Bay, as an alternative to sea fishing.

Cozza di Scardovari PDO should be sprayed continuously with large amounts of water and can be kept for up to four days in the fridge. Ideally it should be consumed after cooking. Although Cozza Scardovari PDO can be eaten on its own, it is particularly appreciated au gratin or as a tasty addition to fish soups and hot and cold seafood salads.

The qualitative, physical and organoleptic characteristics of Cozza Scardovari PDO are the result of the environmental characteristics of the Bay from which they take their name (in particular, the low salinity of the water). Its reputation is documented by photographs of the Cozza Scardovari PDO Festival, which dates back to the 1980s, testimony to a production that involves workers and family businesses and which is able to reach markets in various European countries.