Colline Salernitane PDO extra virgin olive oil is obtained from the Rotondella, Frantoio, Carpellese or Nostrale olive varieties, which must make up at least 65% of the groves, individually or mixed, and the Oglialora and Leccino varieties, which can make up no more than 35%.

The production, processing and bottling-packaging area of Colline Salernitane PDO extra virgin olive oil is located in 86 municipalities of the Province of Salerno, in the Campania region.

The olives must be harvested directly from the tree, either by hand or mechanically. The harvest must be completed by December 31st of each year; this deadline can only be extended with the official permission of the Campania Regional Authority, and in any case no later than January 30th. Milling must take place by the second day following the harvest.

Colline Salernitane PDO extra virgin olive oil is green to straw yellow in colour, with varying intensity; it has a mild to strong fruity aroma and a fruity flavour, with a light to mild hint of bitterness and slight piquancy.

The olive varieties used for the production of Colline Salernitane PDO extra virgin olive oil have been growing in the production area for thousands of years, and have left their mark in many of the local place names, such as the towns of Ogliara, Oliveto and Citra. The diffusion of olive trees in the Salerno area definitely dates back to Roman times, but there are sources showing that the introduction of olive cultivation dates back as far as the arrival of the Phocaeans, an ancient seafaring population from Magna Græcia, on the coast of Campania.

Extra virgin olive oil is highly perishable and it is therefore important that it is stored correctly in order to maintain its organoleptic characteristics. It should be kept in a cool, dark place at a temperature between 14 and 18°C, away from heat sources and other foods that release odours. It should be consumed within four to six months of pressing to fully appreciate its qualities. The Colline Salernitane Protected Designation of Origin extra virgin olive oil has an extremely strong aromatic flavour, making it a very versatile condiment that can be used to add flavour to an extremely wide variety of dishes. It is an excellent dressing for traditional Mediterranean foods.

Colline Salernitane PDO extra virgin olive oil is characterised by a maximum acidity of 0.7 g per 100 g of oil and a polyphenol level of at least 100 ppm. 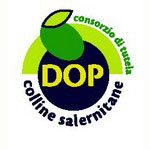