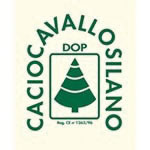 Caciocavallo Silano PDO is a stringy semi-hard cheese produced with whole milk from bovine raised within the production area.

The production area of Caciocavallo Silano PDO is within the internal areas of the provinces of Crotone, Vibo Valenzia, Catanzaro and Cosenza, in the Calabria region; Avellino, Benevento, Caserta and Naples, in the Campania region; Isernia and Campobasso, in the Molise region; Bari, Taranto and Brindisi, in the Apulia region; Matera and Potenza in the Basilicata region.

The milk, from no more than four consecutive milkings, is curdled at between 36-38°C using calf or goat rennet. When the desired consistency is obtained, the curd is broken until the grains reach the size of a hazelnut; the curd is then left to ripen for 4-10 hours, until the conditions are right for spinning; this consists of the formation of a kind of rope that is then shaped into the desired form. Shaping is carried out with the energetic movement of the hands. Each piece is closed at the top end by immersing it quickly in water with a temperature of 80-85°C and the operation is finished manually. The cheese is shaped into the correct form and, where required, a small head is formed. Forms obtained in this way are then immersed in cold water. Salting is carried out in brine, for at least 6 hours. After this process, the forms are bound in couplets and suspended from poles to ripen for at least 30 days.

Caciocavallo Silano PDO has an oval or cylindrical shape, with or without a small head, and presents markings corresponding to where the cheese was tied. It has a soft smooth rind with a straw yellow colour, and a similar interior, which is lightly dappled with white or straw-coloured eyes. It is characterised by a pleasant aromatic flavour and is usually delicate, with a tendency towards sweet when the cheese is young, and piquant in the advanced stages of ripening; it melts in the mouth.

Caciocavallo Silano PDO is one of the oldest and characteristic stringy cheeses from the southern regions of Italy. According to the most accredited texts, its name derives from the custom of hanging cheeses in pairs from a thin beam of wood in close proximity to the fireplace. The first mention of the preparation of Cacio dates back to 500 B.C. Over the following centuries, there is mention of the quality of Butirro (the ancestor of Caciovallo) in works by various Latin authors, among which, Pliny. The name Silano, on the other hand, has ancient origins linked to the Sila Plateau.

Caciocavallo Silano PDO should be conserved in a cool dry place, in its original packaging. If stored in the fridge, it should be kept in the least cold compartment. It is an excellent table cheese and has significant nutritional qualities. Caciocavallo Silano PDO is used in the preparation of many dishes. It is ideal served with red meat and mushrooms, but is also delicious grilled. Its particular qualities make it a fine accompaniment to vintage red wines.

The product is marketed as Caciocavallo Silano PDO. It is sold whole, in large pieces and in pre-packed slices. The product logo and the producer’s ID number must be embossed on the rind.

Caciocavallo Silano PDO is characterised by a high concentration of vitamins, proteins and mineral salts, due to the considerable amount of milk used in its production; 10 litres for each kilogramme of cheese.