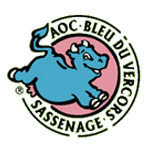 The Bleu du Vercors-Sassenage PDO is a marbledpaste cheese produced exclusively with cow's whole milk coming from animals of Montbéliarde, Abondance and Villarde breeds located in the tableland of Vercors.

The production area of Bleu du Vercors-Sassenage PDO includes 27 municipal areas in the departments of Isère and Drôme located on the tableland of Vercors, in the Rhone-Alps region.

The most important fodder source of the cattle is the grass cropped in summer and the local hay, with they eat during winter. Silo fodder is forbidden. The milk must be curdled using rennet only the addition of milk enzymes and Penicillium. The curd obtained is cut and remixed. Later, the paste is drained to eliminate whey. Then, it is put into cheese moulds and after four mixes, the cheese is salted, removed from the mould and pricked to favour the development of the bleu. Then, it is stored in the cellar for ripening for about 21 days. Fresh cheese and cheese undergoing the maturing process may not be conserved under a modified atmosphere.

The Bleu du Vercors- Sassenage PDO has a cylindrical shape, flat with a hollow trim measuring 28 to 32 cm of diameter and 7 to 9 cm of height. The weight spans from 4 kg to 4.5 kg. The rind is flowered and white colour, with a slight has a white down and red and ivory marbling veins. The paste is marbled, soft and slightly fondant. The flavour is sweet and fine with a slight aftertaste of hazelnut.

The history of Bleu du Vercors-Sassenage PDO goes back to a long tradition. Indeed, in the 15th century, a marbled-paste cheese, called "the cheese of Sassenage" was produced in the tableland of Vercors. In the past, the Vercours lands were famous as Sassenage Mountains, from the name of the Lords of Sassenage, the village which was the main access to the Massif de Vercors. The quality of Bleu du Vercors- Sassenage PDO was recognized and appreciated by historic personalities like Francis I, Henry IV and Diderot, who mentioned it even in his famous Encyclopaedia.

For a suitable conservation of Bleu du Vercors- Sassenage PDO, it is suggested to wrap it into a foil and to store it in the least cold compartment of the refrigerator. Before eating it, it is advised to leave it at room temperature for about one hour, so to better appreciate its characteristic flavour. Bleu du Vercors-Sassenage PDO is ideal both as aperitif accompanied by Clairette de Die AOC wine, and at the end of meal or by Châtillon en Diois red wine. This cheese has the peculiar advantage to melt without becoming fat. So it can be used for the raclette (the cheese is heated, either in front of a fire or by a special machine, then scraped onto to enhance the flavour of dishes. diners' plates) or for the preparation of the sauce

The product is sold as Bleu du Vercors-Sassenage PDO. It is marketed whole or in portions corresponding to a sixteenth or to a eighth of the cheese. Distinctive features

Today, Bleu du Vercors-Sassenage PDO, resulting from a long tradition, is the only cheese produced starting from a milk mix: the one milked the precedent day and heated, and the raw and warm one milked in the morning. In the opinion of Olivier de Serre, who is considered one of the fathers of agronomy, this is the secret of its high quality.