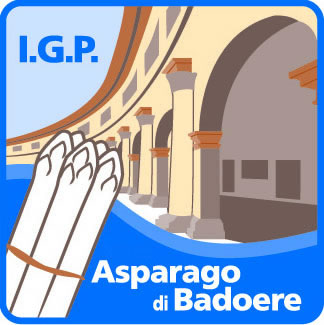 The production area of Asparago di Badoere PGI is within the territory of several municipalities in the provinces of Padua, Treviso and Venice, in the Veneto region.

The cultivation of the Asparago di Badoere PGI involves a three-year cycle and can take place in greenhouses or in fields. An indirect sowing system is used for planting, carried out in three stages: production of the leg roots or young plants; preparation of the ground; planting. The first harvest must take place at least 18 months after the planting date. The dry stems are cut in autumn and winter and burnt to avoid the onset of diseases. The same operation is carried out in the second year. For the White typology, there is a convex shaping of the land, where the plants are positioned on a slope that inclines towards the sides, with a channel of running water. Mulching is mandatory, which involves the soil being covered with black plastic sheets, thereby inhibiting natural photosynthesis and maintaining the white colour of the asparagus. The final stage is the harvesting of the turions, which is carried out by hand in March and April.

Asparago di Badoere PGI is tender and not stringy. The White typology has a straight turion with a very narrow tip; it is white in colour with possible shades of pink after packaging. It has a sweet flavour with a slight aroma of ripe wheat; it is slightly bitter. Green Asparago di Badoere PGI has a straight turion, at times with a curved tip; the tip is very compact, with an intense bright green colour that can present purplish hues. The flavour is sweet and strong, and is not acid, salty or bitter; it has a fruity and herby aroma.

The origins of Asparago di Badoere PGI seem to date back to the Roman conquest of Venetian land. At the beginning it was known as a medicinal plant and later as a food product, thanks to cultivation traditions that have been passed down through the generations. The specialised cultivation of asparagus increased in Veneto immediately after the last war, alongside the transformation of tenant farming and the abandonment of silkworm breeding. There are many documents confirming its prestigious reputation. In 1968, the first Provincial Asparagus Exhibition was organised, and still takes place today.

Asparago di Badoere PGI can be kept for a few days in the vegetable compartment of the fridge, wrapped in a wet cloth. In order to appreciate their particular fragrance, they should be cooked when they are very fresh. They are tasty when combined with hard-boiled eggs and seasoned with pepper, salt and oil. They are also the protagonists of many local recipes such as Risoto de sparasi di Badoere and Sparasi verdi di Badoere in graela.

The product is marketed as Asparago di Badoere PGI in the following typologies: Verde (Green) and Bianco (White). The commercial categories are Extra and First. It is sold in bunches of the same type, category and size, tied with raffia or in suitable food packaging.

The specific characteristics of Asparago di Badoere PGI are determined by the pedoclimatic conditions of the production area: the rapid growth that ensures that the asparagus are not stringy; the particularly bright colour and its special organoleptic qualities.